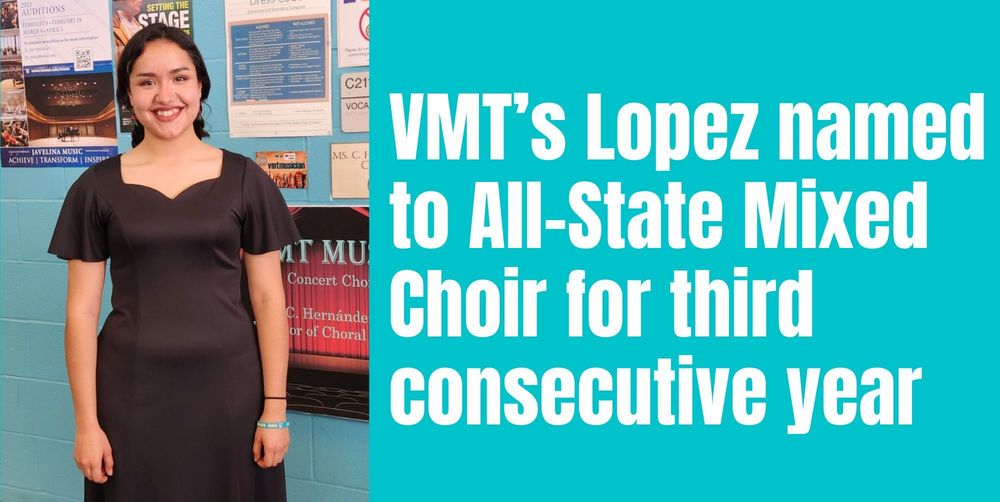 For the third consecutive year, Isabella Lopez, a Soprano One choir singer at the Vidal M. Trevino School of Communications and Fine Arts was selected as a member of the Texas Music Educators Association (TMEA) All-State Mixed Choir.

Lopez received a second chair in the Area finals earning her a spot in the 2023 TMEA All-State Mixed Choir Concert. This achievement makes her a three-time All-State Musician. Last year as a junior, she received a first chair. As a sophomore, Lopez received an eight-chair making this her third time receiving this distinguished honor. She will perform in the All-State Mixed Choir Concert at the TMEA Convention on February 11, in San Antonio, Texas. Isabella is a senior at Nixon High School.

Lopez was chosen for this honor through a competitive process held each year across the state via District, Region, and Area rounds. In the Area finals, she competed against 20 students in her voice part where the top nine advance to state and the top three become members of the All-State Mixed Choir. Isabella placed second and earned a spot in the All-State Mixed Choir, making her a three-year All-State musician.

Lopez, who has enjoyed singing since elementary school and has been competing in TMEA since middle school, will represent VMT and LISD one last time at the All-State Conference.

“I just hope to have a fulfilling experience. I think the most valuable part of All State for me last year was really creating artistry with so many like-minded musicians,” said Lopez. “So, I really want to have another experience like that because it just really filled my soul, and it really inspired me to always aspire for artistry.”

Isabella acknowledged the people in her life who have been supportive of her throughout this entire process.

“I’m very blessed. My parents have never discouraged me from doing what I love and I’m very grateful for that,” said Lopez. “Also, my teachers have a lot of faith in me as a person and as a performer and that has helped me have faith in myself. Ms. Hernandez and my vocal coach Dr. Rymo have helped me with my journey here at VMT.”

Isabella also credits her church choirmates with keeping her grounded. “My church choir has helped give me perspective outside of competition where everything must be perfect,” said Lopez. “It’s good to have fun in music besides being technically precise. Being a musician, you must carry some humility with you or else you are not going to go anywhere.”

According to Lopez, TMEA has allowed her to grow as a person and an artist.

“I think I have a hunger for contest and TMEA really allows me to push myself, be challenged, and grow myself as a musician while still creating art which is a combination that is so fun,” said Lopez. “The TMEA process has helped me discover and trust myself and trust all the practice time that I have put into my artform and allow myself to just create without fear of other people judging. It is good to have a foundation of self-trust and faith that you will perform.”

Isabella is planning to major in music in college. She is currently traveling the state auditioning for several excellent college programs. After college, Lopez hopes to enter a young artist program to eventually work in Opera.

During the convention Lopez will have rehearsals all week with their ensembles and clinicians that culminate with a concert on Saturday night. The TMEA Convention is one of the largest music educator conventions in the entire country and it is the top student performing groups for the entire country the Texas All-State groups.