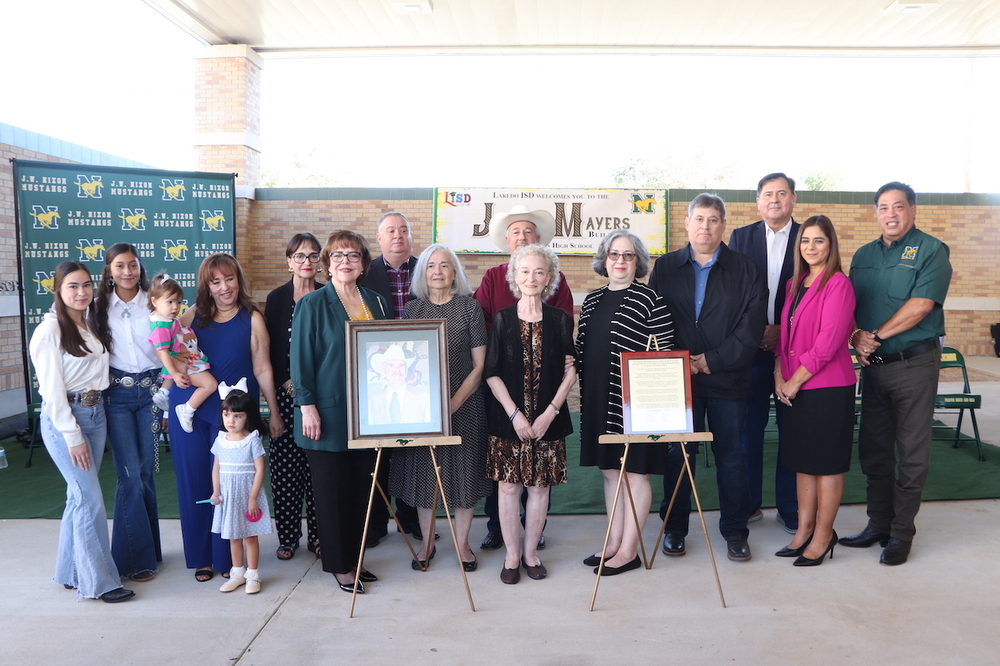 The Laredo Independent School District Board of Trustees dedicated the new Nixon High School Agricultural Building in memory of former educator, the late Johnny Mayers. Mayers was a vocational agricultural teacher at Nixon and Martin High School. He also served as the district’s first Vocational Director for LISD for 14 years.

The Mayers family, friends, former co-workers, and students filled the building’s patio to honor the legacy of the devoted educator and to celebrate the naming of this facility. LISD Board of Trustees President Hector “Tito” Garcia, LISD Board Member Rick Garza, LISD Superintendent Dr. Sylvia Rios, and Joseph Mayers, son of Mr. Mayers addressed the audience.

Mr. Mayers, who had a lifelong love of teaching, learning, ranching, land conservation, and horses, retired from education to fulfill his lifelong dream of ranching full time. He was named LIFE 2007 Rancher of the Year, which was a huge honor for him as it recognized his commitment to ranching.

The Nixon High School ROTC, under the direction of Lt. Col. Bennie Feagin, presented the colors. The Nixon High School Band performed the National Anthem directed by Juan Gerardo Sosa. Abdiana Marines, President of the Nixon High School Chapter of the Future Farmers of America along with nieces of the late Johnny Mayers, Andrea Garcia, and Ashley Garcia who are FFA members recited the Pledge of Allegiance.

A portrait and biographical plaque for the building were unveiled.

The new $8.2M state of the art agricultural facility includes a Meat Processing Lab, and Agriculture and Welding Shop. Each shop has its own instructional classroom adjacent to it. The new building was designed by Cavazos Architects and built by Leyendecker Construction.