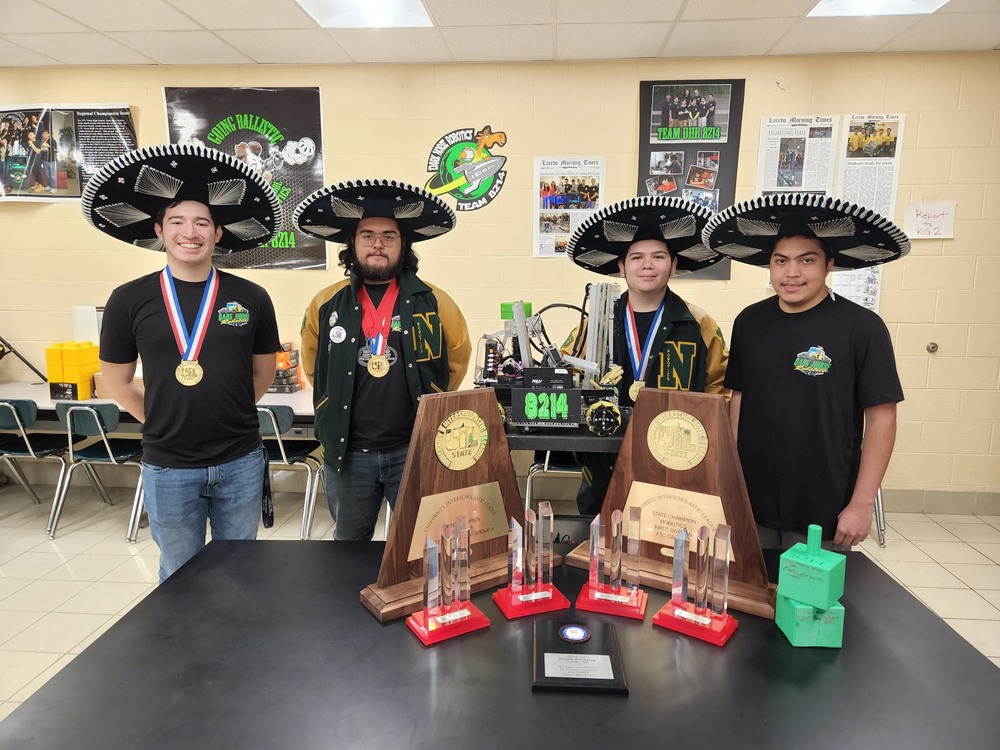 The NHS Dark Horse and CHS Soap Dispenser Robotics teams along with the best of the best First Tech Challenge (FTC) Robots from across Texas gathered for the competition. The teams competed against the state’s top 31 teams in the 5A and 6A division.

In the semifinals the teams won their matches and advanced to the state finals. In the finals the NHS and CHS Alliance came out on top bring LISD two UIL State Robotics Champions.

“Every day after school I left my classroom door open, and the boys came in and practiced. They put in a lot of work and effort,” said Chuck Gonzalez, NHS Robotics Sponsor. “We didn’t expect to win this year, but the team pulled it off. I’m very proud of them winning back-to-back state robotics championship.”

The Dark Horse Robotic Team consist of four members. They are Jason Gamez, Isaias Rosales, Cristian Estrada, and Raul Salazar. The Robotics Team sponsor is Chuck Gonzalez. This is the second year in a row that the Dark horse team wins the FTC State UIL Robotics Championship.

“During these two years we had a great run overall. We feel exhilarated,” said NHS senior Isaias Rosales. “We are so proud to bring back-to-back state championships to Laredo and Nixon High School.”

“Cigarroa High School is beyond proud of the Xtreme Robotics Club Soap Dispenser team who persevered through adversity and worked tirelessly day after day to perfect their robot and win the 5A-6A UIL State Championship,” said Raymundo and Amanda De Hoyos CHS Robotics Sponsors. “The future is extremely bright for them as they are only freshmen. The young robotics members made the shop their home. They stayed long hours and their hard work came to fruition. It was not just about making it to the State Tournament, it was about going and achieving their goal and brining the first ever team UIL State Championship in Cigarroa High School history.”